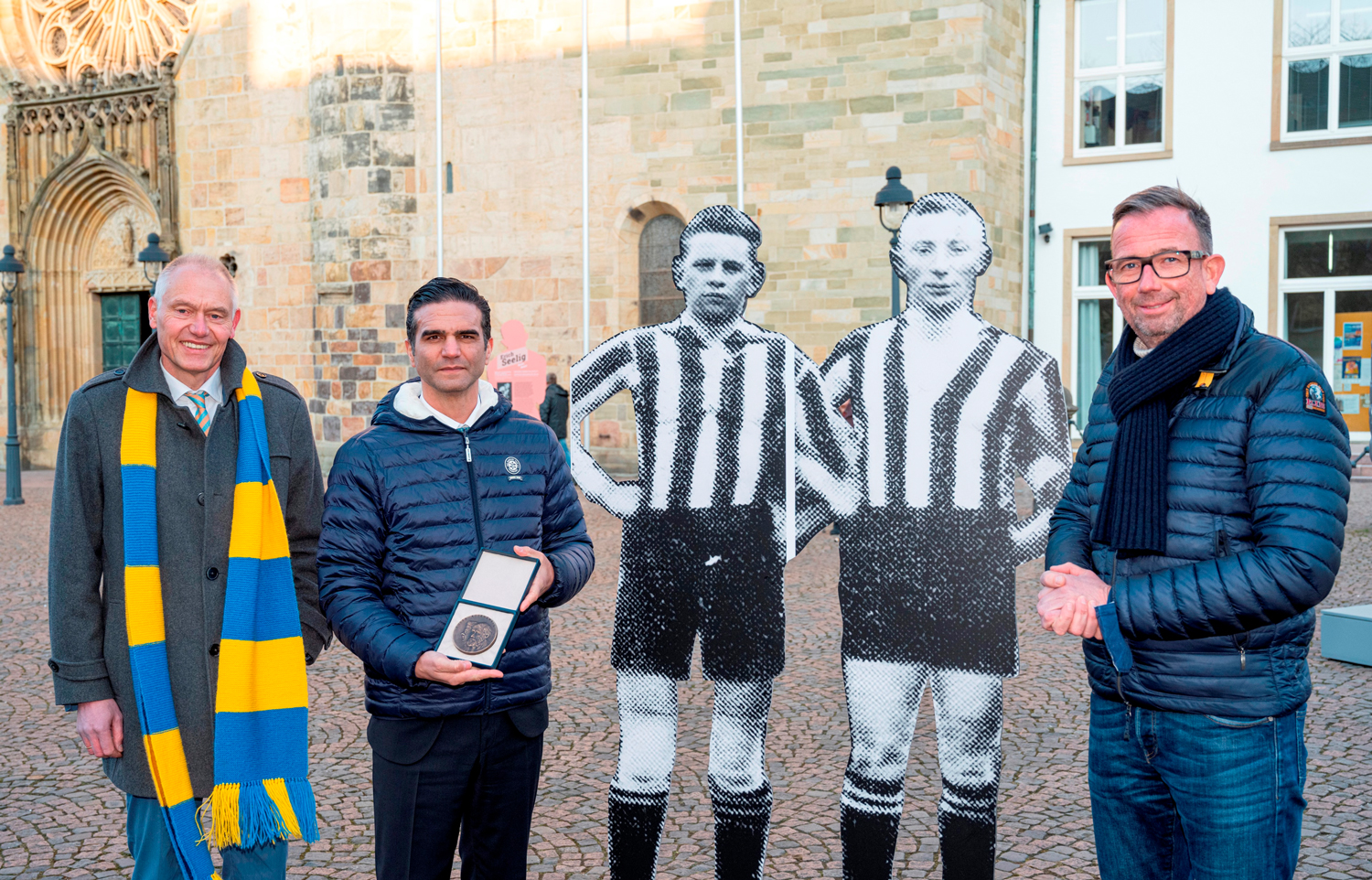 The exhibition “Between Success and Persecution – Jewish Stars in German Sports until 1933 and After” pays tribute to the large share of Jewish athletes in the development of modern sports in Germany with the help of large-scale sculptural presentations. The exhibition is sponsored by the Zentrum deutsche Sportgeschichte e.V. and the Universities of Potsdam and Hanover in cooperation with the Diözesanmuseum Osnabrück.

Currently, it can be seen until March 28 at the Domplatz in Osnabrück. On the square in front of Osnabrück Cathedral, 17 life-size photo figures of important Jewish athletes are on display.

Through the “Tradition Lives on Remembrance” alliance, in partnership with VfL Osnabrück and SV Werder Bremen, KiKxxl has joined forces with SV Meppen to add six more important regional officials, sportswomen and sportsmen to the 17 figures. Two of these Jewish athletes are the two soccer players Kurt Visser and Fritz Cohen, who contributed significantly to SV Meppen’s athletic success. Fritz’s older brother Hans was even on the founding team of SV Amisia Meppen, as SV Meppen was initially known, in 1912.

“In the current times, it is more important than ever to remember the terrible time of Nazi terror as well as the many fates of the people and to make sure that something like that will never happen again. That’s why it was very important to us to support the exhibition,” says Andreas Kremer, managing director of KiKxxl GmbH and spokesman for the board of SV Meppen.

Fritz Cohen was born on March 21, 1904 and grew up with his siblings Hans and Grete in his stately parental home in downtown Meppen. Because at that time in Emsland primarily the Catholic Deutsche Jugendkraft organized league play, the SV did not enter championship series until 1928 when it joined the West German Spielverband. While the parents did not live to see the Nazi terror, their two sons fled to the USA via Gelsenkirchen in 1938/39.

Kurt Visser was born in Meppen on June 9, 1906, and was active both as a soccer player for SV Meppen and in the local tennis club. A friend drove him in his car to the Twister Moor in October 1938, from where he escaped with a smuggler across the border, first to the Netherlands and then to Palestine. Kurt Visser died in Israel on November 5, 1975. His father acted as secretary of the “Association for the Protection and Promotion of the Economic Interests of the City of Meppen” as well as head of the Meppen synagogue community.

Some of the figures will subsequently be exhibited in downtown Meppen.

Safely to the other shore | Bridge construction project completed